Huge congratulations to Andrei Cordea on winning this months Temp Of The Month award!

Andrei has been working as a Operator at a local company and received a special recommendation from his Team Leader, Kim about his nomination;

“I would like to put forward Andrei Alexandru Cordea for Temp of the Month.

This is because since Andrei has joined my shift he has been a joy to work with. He is kind and helpful to all staff members. He has taken to the job like a duck to water and has slotted into the team with ease. He is conscientious in his work and always gives 110%, going the extra mile even without being asked to! His housekeeping is impeccable and whenever he has a spare two minutes he always has a brush in his hand. Andrei’s work ethic is second to none!

Andrei is a well organised individual who can be allowed to work under his own initiative. He has an impeccable eye for detail in whatever I ask him to do and no job is beyond his capability!

Andrei always arrives at work in suitable attire and in plenty of time before his shift starts. He has also not had any absenteeism. Andrei has even offered to give up one day of his annual leave to cover another operator!”

Mr Cordea has been regarded as a pleasure to work with is always incredibly polite when he turns up to work and comes into our Ripley office.

Again, a huge congratulations to Andrei and well done to all other nominees! 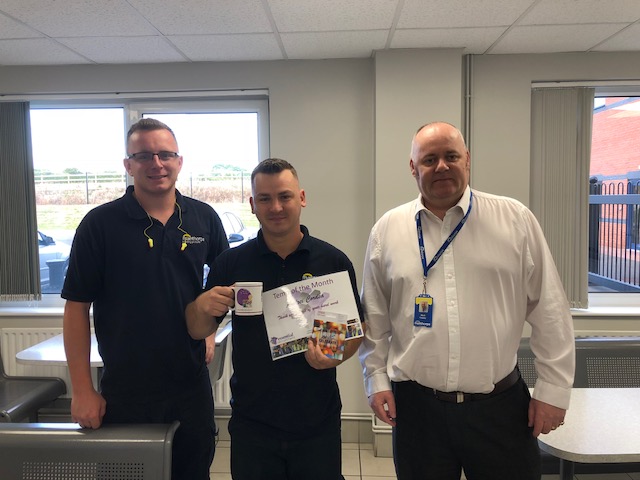 Office: Barnsley
Candidate: Eugen Cosmin Muntean
Job title: Warehouse Operative (Picker)
Nomination Statement:  “Eugen has worked for us as a picker since April, he’s never had 1 single error, no sickness, never been late and works all hours available. He’s had nothing but rubbish orders for the past 3 weeks and has patience of an absolute saint.”

Office: Chesterfield
Candidate: Kamila Jarkiewicz / Justyna Princ
Job title: Warehouse Operatives
Nomination Statement:  “Both ladies have been with the company since we began supplying there, and have never had any negative feedback. They both love it and pick up extra shifts where they can. They’re a delight to deal with, always eager to get stuck into work and have never let us down!”

Office: Mansfield
Candidate: Szymon Milian
Job title: Production Assembler
Nomination Statement: “Szymon has been with our client now for 12 weeks, and his attendance is great – never having a day off sick or turning in late. We’ve never heard a bad thing about him, he never complains and just gets the job done! He’s now being trained up in other departments.”

Office: Worksop
Candidate: Pawel Parzonka
Job title: Production Operative
Nomination Statement: “Pawel has worked for us for 11 weeks, and in that time he has been a great worker. He’s had no sickness or issues at all. He works hard and is always on time.”

Office: Doncaster
Candidate: Barry Nixon
Job title: Warehouse Operative
Nomination Statement: “Barry has been with our client just over a month, he has had no time off and is always the first to put his hand up for over time.  Our client said he is an exemplary employee and they will certainly be giving him a perm position after 12 weeks.”