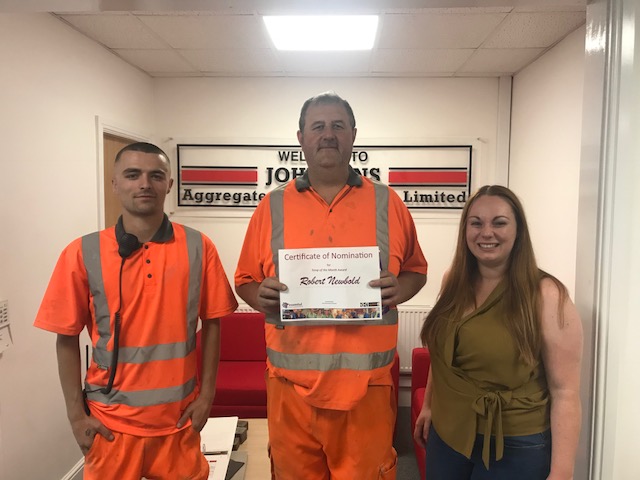 Well done to our winner this month, Robert Newbold from Long Eaton!

Robert currently works for us as a Labourer, and is doing a fantastic job.  Senior Consultant Emma Woodcock says “The client has sung his praises. You give him a job to do and he’ll do it. His attendance is 100%, he has really done Essential proud!”

We wish you all the best of luck Robert, and thanks for being a great Temporary worker!

Office: Barnsley
Candidate: Rhys Atkinson
Job title: Production Operative
Nomination statemement:  “Rhys has been with our client for nearly 3 months now. He has had no issues with attendance and no complaints! Unfortunately someone was bad mouthing Essential on Facebook and Rhys stuck up for us explaining how we stand out from other agencies he’d worked for. We need more temps like Rhys!!”

Office: Burton
Candidate: Leanne Adey Greif
Job title: Administator
Nomination Statement: “Leanne has been fantastic, she is keen and always asking for more. Our client loves her and I think it will be great to reward her hard work.”

Office: Chesterfield
Candidate: Jason Clarke
Job title: Production Operative
Nomination Statement: “Jason has really excelled himself. He is required back every week to a client that is picky with candidates. He has fantastic reports from our client and he has been diamond!”

Office:  Worksop
Candidate: Rafal Rajko-Nenow
Job title: Production Operative
Nomination statement: “Rafal is a very good worker. He goes on his pushbike from Worksop to Retford everyday! His Team leader said that he comes everyday and does a good job. In 11 weeks of working there he has only been off for 2 days due to falling off his bike on way home.”

Office: Doncaster
Candidate: Peter Norman
Job title: General Operative
Nomination statement: “The client absolutely loves him, they have already asked about taking him on permanently. He has picked the job us straight away and has a great attitude.”