On Monday 3rd July, Recruitment Consultants  Yasmin and Angelika from our Worksop branch visited Thornberry Animal Sanctuary!
In 2017 we decided that rather than having a charity of the year as we have done previously, we were going to donate to a different, local charity each month.

Not only does this give our staff an opportunity to support charities close to their hearts, but it allows us to see more of the local communities that we work within, widening our knowledge of what is important to those around us.

We donated £200 to the sanctuary as well as 3 hours of our consultant’s time, taking some of the pressures away from the busy Thornberry staff.

“We went to volunteer at Thornberry Animal Sanctuary where they take in Cats, Dogs and Rabbits (they also have another site for horses).

Once the animals are sent to Thornberry Animal Sanctuary they are put up for adoption.

On the day we visited, we took various dogs for walks through the local woods and down a country lane near to the Sanctuary.  We also spent time with some of the animals that are new and need training/medication.

Most of the adult dogs came from a home that can no longer care for them, so they are cared for by Thornberry until they get new families.”

“We spent about 3 hours at the sanctuary.  The Assistant Manager, Jess, spent the morning with us.

We took two dogs outside to pose for the camera as we handed over the cheque! I held a Dog called Honey and Yasmin’s dog was called Jasmin – haha!

We were told that both dogs have already been adopted and were going home at some point that week.

There was a loooong path that we used for walking the dogs – both of the dogs were brilliantly behaved and didn’t pull or anything and we spent nearly 2 hours with them!

When we returned to the Sanctuary we took another dog out, but this time just the one dog between us both. His name was Hugo. Before we left, we also got to play with another little dog!” 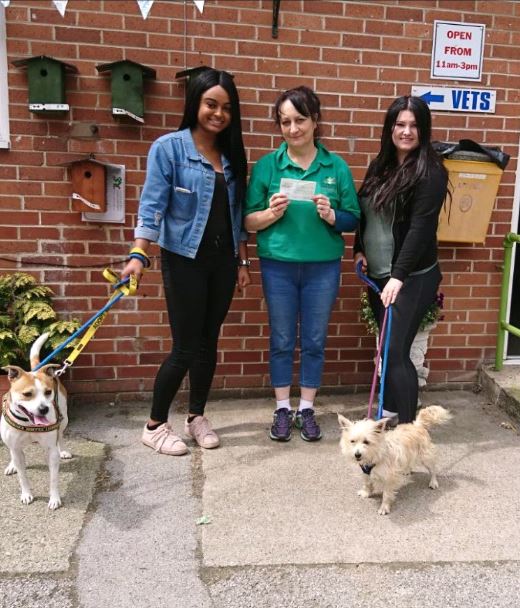 Pictured L-R:  Yasmin (with Jasmin), Jess and Angelika (with Honey).

Find out more about Thornberry Animal Sanctuary by visiting their website.